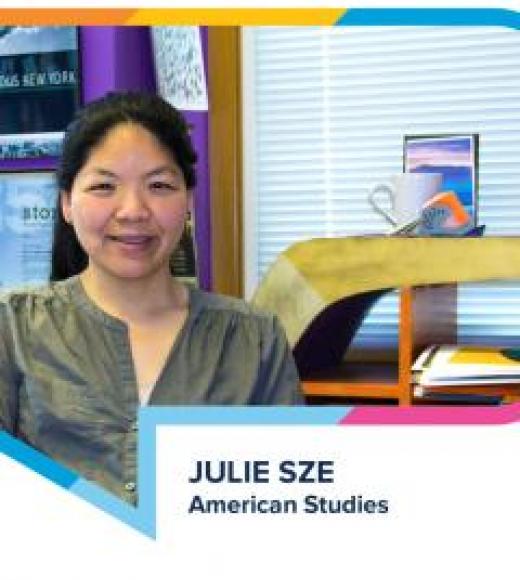 Julie Sze is a Professor of American Studies at UC Davis. She is also the founding director of the Environmental Justice Project for UC Davis’ John Muir Institute for the Environment, and in that capacity is the Faculty Advisor for 25 Stories from the Central Valley. She received her doctorate from New York University in American Studies. Sze's research investigates environmental justice and environmental inequality; culture and environment; race, gender and power; and urban/community health and activism and has been funded by the Ford Foundation, the American Studies Association and the UC Humanities Research Institute. Sze’s book, Noxious New York: The Racial Politics of Urban Health and Environmental Justice, won the 2008 John Hope Franklin Publication Prize, awarded annually to the best published book in American Studies. Her second book is calledFantasy Islands: Chinese Dreams and Ecological Fears in an Age of Climate Crisis (2015). She has authored and co-authored 39 peer-reviewed articles and book chapters on a wide range of topics and has given talks in China, Abu Dhabi, Canada, Germany, France and Italy. Sze has been interviewed widely in print and on the radio.

What is nature? What is culture? This course examines concepts of nature and culture in the United States. The core idea in this class is that concepts of nature and the environment are culturally constructed. In other words, nature is an “artifact” of particular cultures, contexts and communities. We explore the relationship between nature and the environment, how artifacts (i.e. the lawn or an orange) contain a set of belief systems about nature and culture, political economies and how pollution creates impacts outside the object itself. Some of the topics we may explore include: meat, natural history museums, teddy bears, water and wilderness, garbage and human waste. We also examine how categories like race, class and gender shape experiences and representations of nature and culture.

This course is an introductory American Studies course. That means two things: the course materials and our relationship to them are interdisciplinary (meaning that we borrow and use insights from many fields such as literature, history, anthropology and folklore, sociology, literary, visual studies etc), and that we are focused on making connections between ideas of nature and culture, and our everyday lives.

This class is an introduction to the field of American studies, specifically, as an interdisciplinary framework through which to understand American culture. Being “American” means something more than U.S. Citizenship. It is both idea and ideal. How have and do Americans conceive of national belonging, citizenship and culture? Given the racial, geographic and cultural diversity in the United States, the ways in which Americans have imagined our nation has changed over time, place and depending on factors such as race, class, gender, ethnicity, sexuality, religion and place.

This course will examine the promises and the problems of American identity, around certain themes and questions: How and why do Americans think of themselves as a nation? What ideas of national history, patriotism, and moral character shape visions of American-ness? How are boundaries drawn to define belonging in the nation, who is included and excluded and why? What uses have been made of the claim to American identity and what is at stake in that claim? How do we represent the past and what importance does cultural representation have? The course is divided in temporal and thematic terms. The second half of the course will focus on the postwar era, and particularly on California, which has a particular place in the national cultural imaginary.

We will use an interdisciplinary approach, meaning that we will use a variety of primary and secondary sources including film, art, music, photography, autobiography, and fiction to explore class themes.

This course examines consumption in 20th Century America through interdisciplinary lenses: literary, historical, psychological, anthropological, and environmental. How did a consumer society emerge? What is the relationship between citizenship and consumption, historically and in the present? How do gender, race, and class shape consumption practices, marketing and resistance? This course in interested in several key questions: What do we consume? How do we consume? Where we buy products? Why we consume? What are the benefits and the consequences—positive, negative and ambivalent?

(#39) Environmental Justice and Environmental Humanities in the Anthropocene. Proceedings of the German Association of American Studies, published in America After Nature

Coverage of this research in City Lab, SF Examiner, and Colorlines.

(#33) Lead Guest Editor of Special Issue of AAPI Nexus on AAPIs and the Environment, with Paul Ong and Charles Lee, Asian American and Pacific Islander Environmentalism: Expansions, Connections, and Social Change, Volume 11, No. 1, 2013, 83-90.

2012-2013
(#30) Sze, Julie. Boundaries of Violence: Water, Gender, and Development in Context, in American Studies, Ecocriticism and Citizenship: Thinking and Acting in the Local and Global Commons (Routledge) 2013.

There are a number of federal and state agencies that work on environmental justice: